The original Grimaldi Castle tops this enchanting town with gorgeous views over the diverse Côte d’Azur landscape encompassing the Alps, the Mediterranean, its pretty inland villages, Nice and Cap d’Antibes. Known as the  ‘Montmartre of the French Riviera‘, Haut de Cagnes was the haunt of Renoir, Modigliani, Soutine, Yves Klein, Bardot and Cocteau. It’s easy to see why many famous artists lived or found their inspiration here, falling in love with the soft Mediterranean light and honest authenticity.

Haut de Cagnes was listed as a historical site in 1948 and still holds the calm, friendly atmosphere of French village life. Combined with a refreshing international mix these days – this fairytale village enchants and delights. 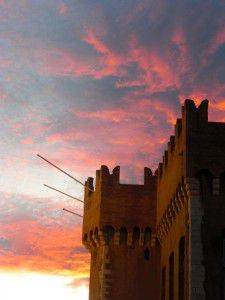 The Château was built in around 1300 by Reinier Grimaldi, Lord of Cagnes and Admiral of France, to keep watch and defend the beautiful Riviera coastline. For two centuries it withstood sieges and assaults before becoming a stately home in around 1620. It was renovated and restored around 1873 and changed hands several times before being bought by the town in 1937. The Grimaldi Castle became the Municipal Museum in 1946 and today it is a marvelous setting which houses the Olive Tree Museum, the Solidor Donation, the Modern Art Museum and numerous contemporary exhibitions.

It’s Renaissance interior is a masterpiece with layers of arcaded galleries, vast frescoed ceilings, stuccoed reliefs of historical scenes and gorgeously ornamented chambers and chapels. The Donation Solidor contains a wonderfully selection of diverse portraits of the cabaret star, Suzy Solidor, whose career spanned the 1920s to the 1970s – she spent the last 25 years of her life in Cagnes.

The reconstruction of an olive mill and exhibition highlighting the importance of the olive to the region can be explored on the lower level and from the top, an amazing panoramic view over the sea and medieval town below lies in wait. 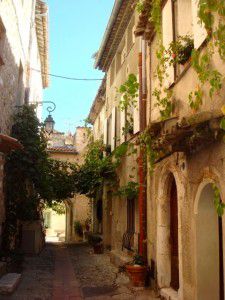 This charming, perched village has so much more to offer, with its tiers of tiny streets, climbing soft stone walls and colourful houses bursting with history. Its tiny squares are carefully tended and decorated with terracotta pots of flowering jasmine, geraniums, fig trees and wisteria – that overhangs tantalizingly from roof gardens. One of oldest buildings in the village is the Chapelle Notre Dame de la Protection – a bijou 14th Century chapel erected as protection against the plague, which contains some beautiful 1530 frescoes.

On the main street and Place du Château, there are plenty of bustling restaurants and cafés plus numerous historical cultural events and colourful festivals are held during the year.

A short stroll down the hill will bring you to the town of Cagnes, which provides all amenities such as a boulangerie, a patisserie, a supermarket, post office, the main bus square and a wonderful covered food market. Close to the town centre lies the Renoir Museum, the Hippodrome for horse racing and Cros de Cagnes – the seaside resort of Cagnes sur Mer with its private and public beaches.

The location is central to so many things to see and do and is great value with a return bus trip to most towns only costing €3. You won’t be disappointed!

Looking for a private vacation rental on the Cote d’Azur between Nice and Antibes – somewhere where you can walk to pick up your fresh morning croissants, amble down to the beach or take a pleasant stroll back from a variety of restaurants in the evening? Try the relaxing atmosphere of a French village holiday rental… 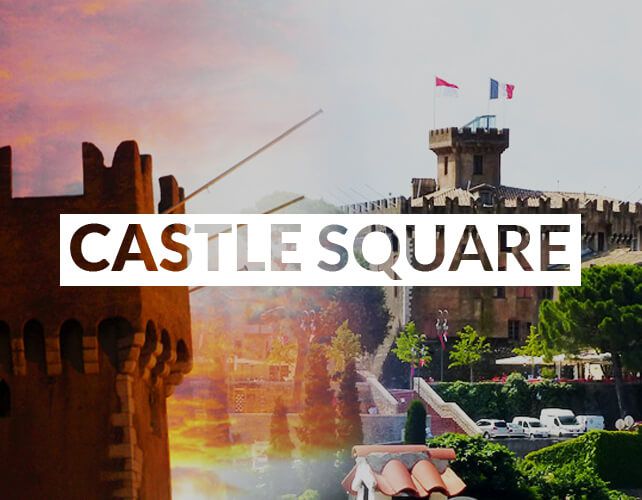